The Borders’ July 18, 2011 announcement that efforts to conduct a going concern auction had been abandoned means more than the trade creditor write off of $398 million in acknowledged pre-petition unsecured claims.  Many of Borders’ vendors will face the possibility, if not the probability, of receiving a demand pursuant to Section 547 of the Bankruptcy Code for repayment of amounts received from Borders in the 90 days prior to the date of bankruptcy (the “Preference Period”).  1786 creditors received a total of $485 million in payments from Borders, Inc. in the Preference Period.   Of this $485 Million, more than $318 million was paid to the Top 50 Preference Period Payment Recipients.  In percentage terms, approximately 5% of the creditors received more than 72% of the dollars paid out in the Preference Period.  For the remaining 1683 creditors potentially facing preference claims of less than $500 thousand, this high end concentration is not good news.

This article analyzes the pre-bankruptcy payment data, discusses the factors indicating preference claims will be brought and explains why mid-market trade creditors likely are targets despite their proportionately small percentage of the total Preference Period payments made by Borders.  Click this link to read the rest of the article. 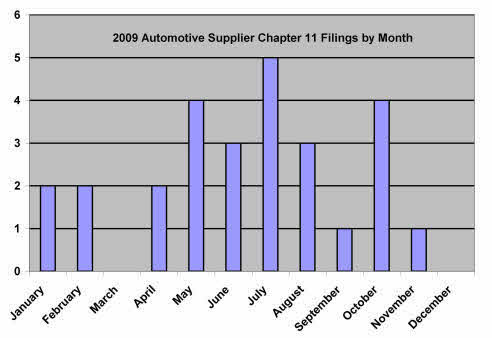 o seek Chapter 11 bankruptcy protection in 2009.  The number of filings is only the headline of the story.  While estimated trade creditor distributions on prepetition claims swung the spectrum of 100% to 0%, estimated recoveries of less than 2 percent predominate.  And more trade creditor pain looms in several bankruptcies, as bankruptcy preference action recoveries are either included in liquidation budgets, are necessary to avoid administrative insolvency or are likely to be sought by plan administrators and liquidation trustees.

This article provides a comprehensive list of the 27 automotive supplier Chapter 11 bankruptcies in 2009, together with status at the end of 2009, estimated trade creditor recoveries and the potential for avoidance actions.