1786 creditors received a total of $485 million in payments from Borders, Inc. or its co-debtors (“Borders” or the “Debtors”) in the 90 days before their bankruptcy. For these creditors, the Borders’ July 18, 2011 decision to liquidate means more than a write off of pre-petition unpaid invoices. Many of Borders’ vendors may be asked to repay as “preferential transfers” or “bankruptcy preferences” amounts received from Borders in the 90 days prior to the date of bankruptcy (the “Preference Period”). Section 547 of the Bankruptcy Code provides for such “clawbacks” of transfers found to be “avoidable” and not protected by one or more defenses.FN1

Much of the focus has been on the impact of the Borders bankruptcy on the publishing houses. Indeed, for some of these large creditors, the combination of the pre-petition unpaid claim amounts and the Preference Period payment amounts represents huge potential exposure by almost any measure.  (See which creditors are on both Borders’ 30 Largest Unsecured Creditors and 50 largest payment recipients lists.)

While the dollar impact on the large creditors is impressive, the number of mid-market vendors affected by the Borders liquidation is staggering. In additional to smaller national vendors, the location of hundreds of stores though out the country meant that there were hundreds of regional and local vendors. This is reflected in the large number of vendors, more than 1200, who received between $5,850FN2 and $100,000 from Borders in the 90 days before the bankruptcy.

This article analyzes the pre-bankruptcy payment data, discusses the factors indicating preference claims will be brought and explains why mid-market trade creditors likely are targets despite their proportionately small percentage of the total Preference Period payments made by Borders.

Borders’ Payments in the Preference Period

The Borders, Inc. Amended Statement of Financial Affairs filed on April 13, 2011, included as Schedule 3b a list of each creditor who received more than $5,850 during the Preference Period together with the amount of each payment made.  The distribution of creditors by size of the payments in the Preference Period is illustrated in Table 1.  The crossover pattern shown on Table 1 is very common – the majority of preference period payments are usually made to a minority of creditors.  However, in the case of Borders, the crossover occurs only when the payment range reaches the $500 thousand to $1 million bracket.  This indicates an unusually large concentration of payments to a very few creditors. 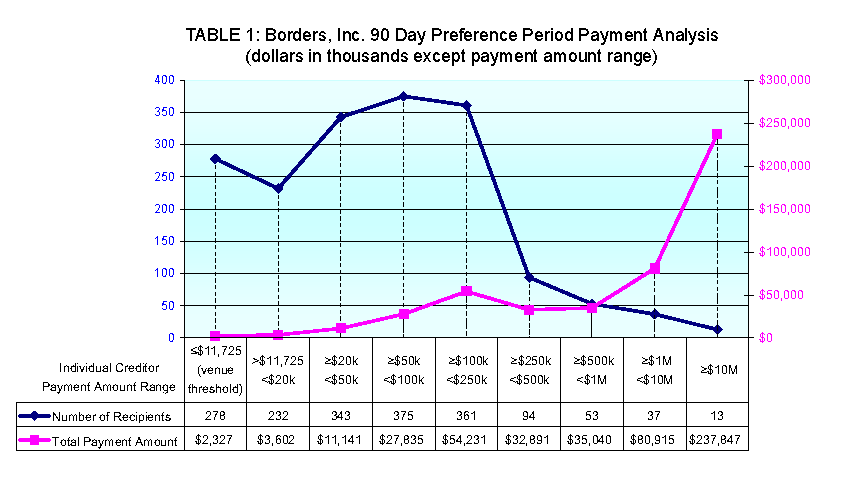 An analysis of several key factors leads to the conclusion that it is probable mass preference claims will be pursued in the Borders bankruptcy.

First, Borders will need the money generated by preference claims.  Because preference claims arise at the time of the bankruptcy filing, they are not subject to the security interests of pre-petition secured creditors.  Lenders providing debtor-in-possession (“DIP”) financing may try to obtain a lien on the preference claim recoveries.  Such was the situation in Borders, but the Creditors Committee objected and the DIP lender’s request for a lien on preference recoveries was dropped.  The Borders’ preference recoveries remain one of the Debtors’ few unencumbered assets available to fund the Debtors’ liquidation and provide recovery to the general unsecured creditors.

Third, there are indications that, at least for the largest unsecured creditors, one of the three primary preference claim defenses may be unavailable.  This means that there is a potential for higher percentage recovery on the Borders’ preference claims.

Is the Ordinary Course of Business Defense to Preference Claims Available to Borders’ Creditors?

The ordinary course of business defense affords protection for payments made during the preference period that are paid consistently with the historical payment patterns and dealings between the creditor and the debtor.  The Declaration of Scott Henry Pursuant to Local Bankruptcy Rule 1007-2 in Support of First Day Motions (the “First Day Motion Declaration”) puts in doubt that the largest unsecured creditors will be able to prove this consistency in dealings.  The First Day Motion Declaration provides the following description of “Vendor Financing”:

36.  Also, in December 2010, the Debtors announced that due to liquidity issues they would withhold payments to certain vendors and seek to restructure those obligations on a consensual basis. In January 2011, the Debtors increased their holdback of vendor payments and began to withhold payments to landlords as well. Prior to the Commencement Date, approximately $178.8 million was past due to vendors, and approximately $18.6 million was past due to landlords.

For the very large vendors, the loss of a potential ordinary course of business defense caused by going to “cash on delivery” may be offset by the possible qualification of C.O.D. payments under the contemporaneous exchange defense.  The contemporaneous exchange defense is notoriously fraught with difficulties and is inherently fact intensive.  Its potential availability is an improbable factor in any decision to pursue preference claims.

Fortunately, for the vast majority of Borders’ vendors, the ordinary course of business defense is likely to remain intact.  The cash-management technique of stretching out invoice aging is oftentimes not directed to mid market vendors.  The administrative burden of delaying small vendor payments can not be justified by the relatively inconsequential cash flow benefits.  Also, few mid market vendors have the leverage to demand and obtain the preference-claim safe harbor offered through properly implemented “cash on delivery” arrangements.

Was Borders Insolvent throughout the Preference Period?

In order for any of the Preference Period transfers to be avoidable, Borders must have been “insolvent” at the time the payment was made.FN3 “Insolvency” in the Bankruptcy Code is based on a comparison of the “fair valuation” of the debtor’s assets against the amount of its liabilities.  If the value of the assets is less than the amount of its debts, the debtor is “insolvent”.

Despite the encouraging indication provided by the Borders, Inc. bankruptcy schedule, the possibility of a challenge to Borders’ solvency during the preference period is unlikely to deter a mass bankruptcy preference campaign.  First, preference claimants, even when debtors in possession, seem to have little difficulty repudiating debtor bankruptcy schedules.  Second, although in theory the fair value of assets should be determined based on pre-petition conditions and without considering the value devastation caused by the bankruptcy filing itself, bankruptcy courts have looked to post petition valuations in determining pre-petition solvency.  In the case of Borders, it will be difficult to overcome the reality of a post petition liquidation that produces pennies on a pre-petition balance sheet asset valuation.  Finally, the complexity and expense of an insolvency dispute make it the province of the few creditors who have substantial amounts at stake, substantial financial resources and the willingness to expend those resources in pursuit of a issue whose resolution is in doubt.

The Debtors’ and the Creditors Committee’s evaluation of the Borders’ preference claims will start in earnest soon.  The “who and when” questions regarding the prosecution of preference claims will not be answered until the Debtors unveil a plan of liquidation or move to convert the cases to Chapter 7.  In all events, the most important task for a potential defendant is assembling and preserving records regarding the business and financial dealings with Borders’ – invoices, payment records, delivery documentation, contracts, and other communications.  Both figuratively and literally, its not time to close the books on Borders.

FN1 The Bankruptcy Code in Section 547 authorizes the trustee, if one has been appointed, or the debtor in possession, or any other bankruptcy court approved representative of a debtor’s estate to seek recovery of “avoidable” transfers.

The five requirements for a transfer to be found an “avoidable” preference are in Section 547(b), and simplified, require that the debtor have transferred, (1) in the 90 days preceding the debtor’s bankruptcy filing (2) while the debtor was insolvent, (2) something belonging to the debtor (3) to a creditor (4) against a pre-existing obligation (5) thereby allowing the creditor to receive more than it would have in a Chapter 7 liquidation where the payment was not made.

One a transfer is show to be avoidable, the burden shifts to the defendant to establish that the transfer is protected by one or more defenses.  The three most common defenses are the ordinary course of business defense, the subsequent new value defense and the contemporaneous exchange defense.  However, there are at least 32 defenses to preference claims found both inside and outside of the Bankruptcy Code.

FN2 A debtor is not required to disclose payments to creditors who received less than $5,850 during the 90 days before the bankruptcy.  See Discussion of Bankruptcy Preference Jurisdiction Limit.